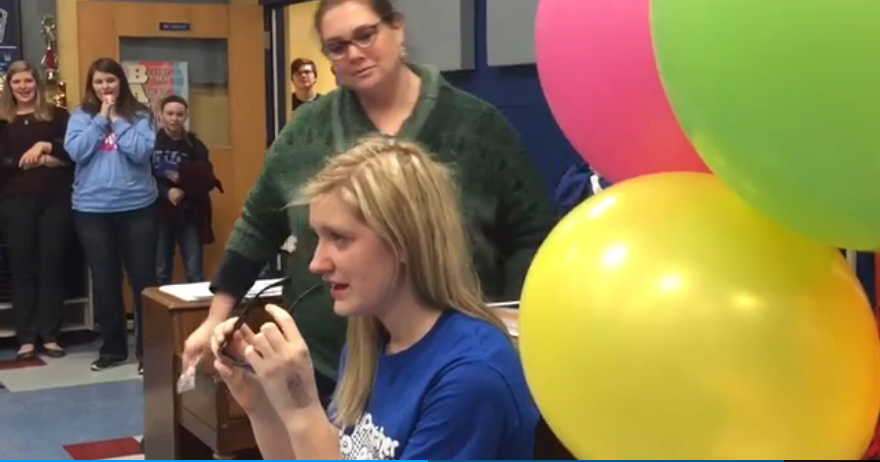 In 2012, Kayla Jackson was diagnosed with anxiety and depression. She was prescribed a drug to help her combat her symptoms. Little did she know that by taking the drug she would be stripped of her ability to see color. She can dream in color but has only seen shades of yellow in real life.

A few years later she would join her high school pep band and find that her happy place was band. Her band friends had heard her talk about EnChroma glasses which is known for helping the color blind see color.

Micah Violette and Kylie Jordan, two juniors at Southeastern High School and band mates set out to get Kayla a pair. The only problem was the glasses cost $460. The girls built a GoFundMe and raised $500 from fellow band members, band parents and others that heard about their goal.

Once they had the money they went and bought a pair of the glasses. To surprise Kayla with them they pretended that she had won a school raffle. She walked up to the front of the band room and was shocked as her life was about to change forever. The Chillicothe Gazette was there to capture the moment and interview Kayla. Here’s what she said about the surprise:

“You kind of don’t realize how much you’re missing until it’s all revealed to you. This goes down in history as one of the best days of my life.”

“It’s just crazy these guys would do that,” Jackson said. “It’s just really amazing. When I put them on, I felt, it was amazing. I felt kind of sick. I just wanted to cry. I saw the world correctly for the first time in forever. It’s kind of like watching a movie you haven’t seen since you were really little. Not only does it bring back memories but it’s just so cool.”

“I can’t even explain how thankful I am,” Jackson said. “I’ve got the best friends I could ever ask for. This means more than they know.”